Origins of the American Solidarity Party of Ohio 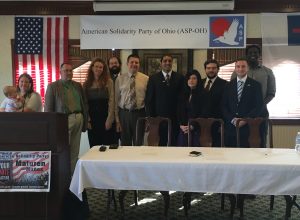 The American Solidarity Party (ASP) identifies itself as a Christian Democratic political party. As such, the concepts of Solidarity, Subsidiarity, Sphere Sovereignty, Cultural Mandate, Preferential Option for the Poor, Distributism, Stewardship, and the Dignity of Labor are relevant.

The teaching of Solidarity emphasizes the interdependence of human beings with one another, and with God. To be succinct, solidarity upholds the view that we are members of one human family designed by a loving Creator.

Subsidiarity and Sphere Sovereignty are two other related concepts that are emphasized within Christian Democracy. Subsidiarity teaches that higher levels of government should only address those issues that cannot be solved at the local level. Sphere sovereignty likewise emphasizes the fact that each sphere of life has its own responsibilities and authority, with each sphere of life being equal to one another and all spheres being under the dominion of God.

Cultural Mandate refers to the societal promotion of and respect of the moral law contained in the Decalogue, which originates justice that values the protection of all people. The preferential option for the poor refers to our obligation to care for the poor and vulnerable.

Distributism refers to an economic system that promotes the spread of the benefits of freedom and economic initiative as widely as possible, rather than being under the control of the state or by large corporations run by wealthy individuals. It supports the idea that property ownership is a right.

Stewardship, or Creation Care, emphasizes the responsibility of humanity to look after the environment that offers us the resources that we use in everyday life.

The Dignity of Labor is another concept emphasized within Christian Democracy that holds work to be good in sustaining civilization. It advocates trade unions as they help in the promotion of a living wage, as well as leave for rest and familial responsibility.